Stepping out of Kathmandu Airport and into the city was like stepping into another world. Those first minutes looking for my taxi were an assault of sights and sounds, with everybody fighting to persuade travellers to buy something or stay at their hotel! I met the friendly volunteer coordinator, who led me to the truck and chatted to me whilst I sat dazed in the back seat.

The journey to the hotel was fun! Potholes, mud, constant hooting, and goats wandering across the road were my first introduction to the beautifully chaotic culture of Nepal. Arriving in apparently the biggest downpour of the monsoon season, it was good to get to my room, which had a lovely view of the city, the hills, and temples beyond, all covered in mist.

The hotel was lovely and quite central in Thamel, which allowed us to walk to many places and wander around local shops on most evenings. On the first morning, our briefing was conducted on the roof terrace, which also had a stunning view (we spent many evenings up there playing card games and chatting). The coordinators were very welcoming and friendly, and they gave us a brief introduction to Nepal’s main religions and culture, and explained to us what we would be doing over the next two weeks. We all played a few games to get to know each other and then it was off to our building site for our first day of work.

Upon our arrival at the school, we were greeted by the schoolchildren with blessings and flowers, and welcomed by the headmaster, who explained that their current site was unsafe and so we would be helping to build a new one. The site was on the edge of Kathmandu and the views were amazing - rice fields, hills covered in mist, and everything so green! Over the two weeks, we helped with many different tasks including bricklaying, digging, cement mixing and brick soiling, and we got extremely muddy and wet, which all added to the fun. By the last day, we could clearly see the progress we had made, which was very satisfying. We were guided in our work by a local engineer and builders. One lovely man looked at least 60, but was much stronger and more energetic than any of us!

We also got the chance to spend some time with the children, whose new school we were building. We had great fun playing games and drawing pictures with the little ones. The children were so smart in their little uniforms and loved having their pictures taken.

The last day was very special, and it ended with lots of singing and dancing with the children and teachers in the school playground. The children and staff all seemed very grateful for the work we did, handing us scarves and more blessings. Saying goodbye was bittersweet.

Afternoon activities and our weekend trip

On our first evening, we had a Nepali language lesson, which, although hard, did help us to communicate a little easier with the locals. This definitely came in handy when bargaining! Over the course of the two weeks, we also visited the most ancient part of the city. It was fascinating learning the story of the living goddess and glimpsing her at the window of her temple, although sadly many of the temples and courtyards in this part of the city were destroyed in the recent earthquake. The garden of dreams was also a wonderful place and it was so peaceful compared to the chaos of the city. Another must see is the monkey temple, which has beautiful views and very friendly monkeys (the baby ones were so cute!)

For our weekend trip, we visited Pokhara, a peaceful lakeside town about a five-hour bumpy bus journey from Kathmandu. The clean air was a wonderful relief from polluted Kathmandu and the atmosphere was much calmer. On Saturday, we got up super early to watch the sunrise over the hills surrounding Pokhara and we had a clear view of dramatic snow-capped mountains. We then returned to our hotel to rest before driving to a scary suspension bridge, visiting a little temple inside a cave, and climbing up to the World Peace Pagoda. That evening, we took smoothies to the lake and relaxed together. We even glimpsed a firefly. The next morning it was back to busy Kathmandu, but the long journey was well worth it – Pokhara was lovely.

On the last evening, we went souvenir shopping in Thamel, which is full of little treasures to take home. We then returned to the hotel and all had our arms decorated with henna. The skill of the women who applied it was incredible! After this, we headed up to the roof for a farewell party, which felt very strange after spending two weeks with a group of such lovely people. Goodbyes were hard but I made several friends, which I really hope to keep in touch with and perhaps volunteer with again in the future.

Overall, my trip was an unforgettable experience, and inspired me and, I think, everybody in our team to volunteer again in the future. 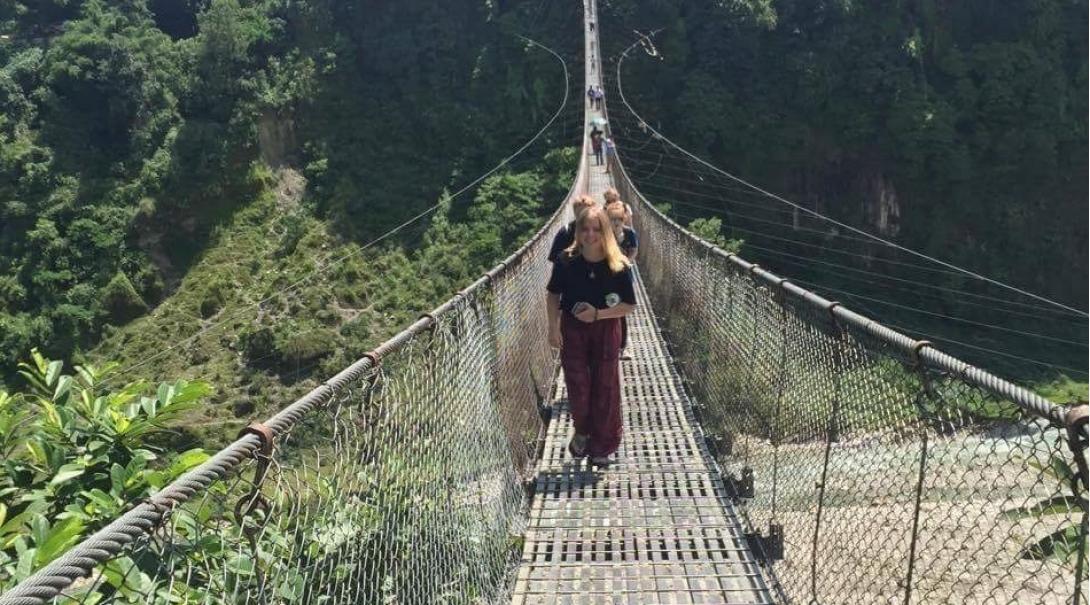